To share your memory on the wall of Arthur Papas, sign in using one of the following options:

Your condolence has been submitted for approval. There may be a delay before posting.

There may be a delay while processing. Please do not click the back button or refresh while a payment is processing.

Your donation has been processed successfully

Jerry was born in Oxia, Kastoria, Greece as Argyrios Papakonstantinou. With little opportunities, he was sponsored by cousins Bill and Ellen Mitchell for immigration to the U.S. in 1951 and became a naturalized U.S. citizen in 1956. Jerry began his lifelong career in the restaurant business when he became a cook at Kramer's Restaurant in downtown Rochester. It was while at Kramer's that he met his future wife, Karin, who was also employed there. They married in 1960 and began saving for their own business. This became a reality when they started Points West Restaurant on Mt. Read Blvd. in the 1960's. Later on, Jerry formed a partnership with two fellow Greek-Americans, Nick Kostarellis and Jimmy Ziakas and expanded to a total of seven Points West Restaurants during the 1970's and in the 1980's he owned the Buccaneer Restaurant. In 1990, Jerry and family started the Parkside Diner in Irondequoit, where he instilled his strong work ethic to his children and grandchildren. Jerry could frequently be seen socializing with patrons and doing what he loved best-being with people.

Jerry had a witty sense of humor which could make everyone laugh. He was a wonderful story-teller with a cheerful demeanor. He adored and was proud of his six grandchildren. He especially enjoyed playing cards with his dear friends Jerry and Danny and shared many laughs over the years with friends Pat, Alex and George, Jimmy's father-in-law, Pando and his dear cousin "Uncle Billy."

A special thanks to the staff at Hill Haven Seabreeze Park Unit for their continuous care and attention. Their services are most appreciated. Also, a special thank you to the Mitchell cousins, Kathy, Patty and Jane for all their love, guidance and support.

Family and friends are welcome Sunday 4-7pm at the Dreier-Giltner Funeral Home, 1717 Portland Ave. Trisagion Service at 7pm. Funeral Services will be held on Monday, 11am at the Greek Orthodox Church of the Annunciation at 962 East Ave. Interment White Haven Memorial Park.
Read Less

To send flowers to the family or plant a tree in memory of Arthur "Jerry" Papas, please visit our Heartfelt Sympathies Store.

Receive notifications about information and event scheduling for Arthur

By subscribing to updates, you will receive any notifications sent about changes to service schedules or other important information

Please add your text number or email address before submitting.

You have successfully been subscribed to notifications!

You will receive any future notification messages.

Provide comfort for the family with a meaningful gesture of sympathy.

We encourage you to share your most beloved memories of Arthur here, so that the family and other loved ones can always see it. You can upload cherished photographs, or share your favorite stories, and can even comment on those shared by others.

Rolland, Mike and Debbie Pokutecki, and other have sent flowers to the family of Arthur "Jerry" Papas.
Show you care by sending flowers

Posted Jun 22, 2019 at 06:17pm
June 22, 2019
The Papas Family:
We are sorry to hear the loss of your father. Michael and I are thinking of all of you during this difficult time of loosing your father. Our Thoughts and Prayers are with all of you. Time may pass, It will be difficult, its not easy, but hold on to the good memories you shared with your father!
Many Blessings!
Sincerely,
Chrissy Ziakas and son, Michael /Toronto, Canada

"WORDS WILL NOT WIPE AWAY YOUR TEARS AND HUGS MAY NOT EASE THE PAIN. BUT HOLD ONTO YOUR MEMORIES BECAUSE FOREVER THEY WILL REMAIN."

Flowers were purchased for the family of Arthur Papas. Send Flowers 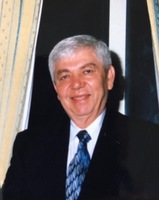