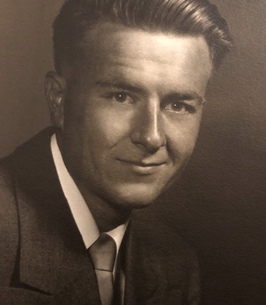 Obituary for Dr. Frank B. Soults

ROCHESTER , N.Y.— Dr. Frank Brady Soults, a distinguished Rochester psychiatrist and devoted husband and father, passed away from complications of Parkinson’s disease on November 24, 2018. He was 90.
As former Clinical Director of the Rochester Psychiatric Center and Hutchings Psychiatric Center in Syracuse, Frank was dedicated to developing community support in an era of deinstitutionalization, while also attending to his thriving private practice and his 46-year-marriage to Kathleen Soults (née Meehan), a marriage steeped in their joint love of travel, cooking, the arts, and family. His beloved wife passed away on March 15.
Frank was born on November 2, 1928 in Watertown, N.Y., the elder child of Geraldine Soults (née Brady), a nurse, and Dr. Eagleton Clifford Soults, a respected physician and surgeon, who settled with his wife, son, and daughter in Carthage. Frank grew up both as an outdoorsman and a lover of learning. As a teen, he played on the Carthage High School football and quiz teams, while occasionally assisting his father on medical rounds.
Frank graduated from Colgate University with a B.A. in zoology in 1950, earned his M.S. in biochemistry at the University of Maine in 1952, and worked everywhere from the prestigious Jackson Labs in Bar Harbor, Maine, to a firefighting crew in Alaska before moving to Europe in 1953. After taking medical and language classes in France and Germany, he enrolled in medical school at the University of Lausanne, Switzerland. Upon graduating in 1961, Frank returned to the States for a residency at Upstate Medical Center in Syracuse (where his eldest son, Dr. Clifford Soults, also trained as a neurosurgeon).
In 1972, Frank married Kathleen, a social worker for children, and for nearly a half century the couple led a happy personal and successful professional life in Syracuse; Roanoke, Virginia; and finally Rochester, where they settled in 1980. Frank earned the prestigious John Romano award in psychiatry in 1989 and was named a Distinguished Life Fellow of the American Psychiatric Association in 2003, the year of his retirement. Friends and family will always remember Frank for his love of dry red wine and his even drier wit, and will always be inspired by his quiet, stoic strength, which steadily deepened with age.
He is survived by his loving sister Sally Brennan, her six children, and their families; by his stepdaughter Ann and her fiancé Eric; and by three sons from his first marriage to Sonia Soults (née Ibañez) and their families: Clifford, his wife Lucia, and their children Madeline and Catherine; Franklin and his children Henry and Louis; and Johann and his partner Scott. He also leaves behind his devoted ex-daughter-in-law Suzanne Buchanan, and his siblings-in-law Mary Ellen Oldenburg, Tisha Meehan, and Jim Meehan.
A Memorial and final viewing will be held on Saturday, December 1 at 11 AM at Dreier-Giltner Funeral Home, 1717 Portland Ave, Rochester New York. In lieu of flowers, please consider a donation to the Parkinson’s Research Foundation (parkinsonhope.org) or your favorite charity.


To send flowers to the family of Dr. Frank B. Soults, please visit our Heartfelt Sympathies Store.

We encourage you to share any memorable photos or stories about Dr. Frank. All tributes placed on and purchased through this memorial website will remain on in perpetuity for future generations.

Share on Facebook
Send flowers to the family
Choose from beautiful standing, table and basket arrangements. Safe and secure online ordering.
View Flower Arrangements
What has already been purchased for the family?
Family Log-In