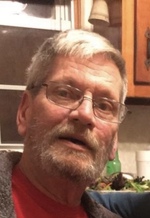 John Stephen Young passed away on Thursday, March 26th at Strong Memorial Hospital, at the age of 64.
John was born on May 6th, 1955 in Hudson, NY. His family moved to West Irondequoit in 1958 where he happily lived for the remainder of his life. John graduated from IHS in 1973 and subsequently worked as a bartender in numerous places, where he became a favorite of many. He was a member of the Laborer’s Union for many years. John was a man who loved his community….his family, his friends and his neighbors and had a truly magnetic personality. One of his most cherished gatherings were the annual family reunions. He was predeceased by his parents, Rev. Paul and Margaret Young. He is survived by his wife Janet Young, his sister Christine (Tom) Cassel, his brother Larry (Jennifer Engel) Young, his daughter Rebekka June, his stepchildren David (Stephanie) Niggli and Jess (Mike) Scipione. He also had 5 dearly loved nephews, Joseph, Bradley, Thomas, Jack and Robert and 5 grandchildren.


A celebration of his life will be scheduled at a later time. Memorial donations can be sent to the Palliative Care Unit 41200, c/o URMC Strong Memorial Hospital, 601 Elmwood Avenue, Rochester, NY 14620.