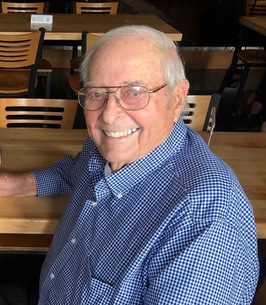 Bob was known for his infectious smile and wonderful sense of humor. He was a graduate of Aquinas Institute and the College of the Holy Cross. He taught at Aquinas Institute for three years before joining his father’s business at Donuts Delite, Inc. Bob eventually became owner along with his wife Judy and their five children. Following his love of historical preservation, he then went on to restore Rochester’s last classic diner. The family opened the Highland Park Diner in 1986. An avid antique car collector, Bob was an active participant in both the Early Ford V8 and the Genessee Valley Antique car clubs. He was also one of the founders and president of the Early Ford V8 Foundation Museum in Auburn, Indiana. As president of the Browncroft Neighborhood association for many years, he was instrumental in its Landmark preservation. He was also an active supporter of the following organizations: Eastern Service Workers, the DAV (Disabled American Veterans), the VFW, the School of the Holy Childhood, the Boys of Industry, Abbey of the Genessee, House of Mercy, St. Joseph’s House of Hospitality, Advent House, the Laurelton & Ridge Culver Fire Departments and countless others.

Friends may call Thursday from 4-8 PM at the Dreier-Giltner Funeral Home, 1717 Portland, Rochester, NY. On Friday, October 22, 2021, all are invited to attend his Funeral Mass at 10:00 AM at Holy Trinity Church, 1460 Ridge Road, Webster, NY. Interment immediately after at White Haven Memorial Park, 210 Marsh Road, Pittsford, NY. In lieu of flowers, donations may be directed to Eastern Service Workers, 234 Bay St, Rochester, NY 14605 in his memory or Early Ford Foundation Museum, 2181 Rotunda Drive, Auburn, IN 46706.