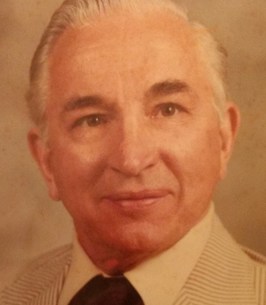 
Metsie Anthony Olesiuk passed away peacefully at his home on Oct. 30, 2018 at the age of 100. Born Jan. 20, 1918, he grew up on the family farm in S. Hadley, MA. He was the son of Polish immigrants. Metsie left the farm at an early age and worked as a machinist at Worthington Mills. He volunteered for the Army in May, 1941 and served his country, receiving an honorable discharge in 1945. He married Jane Cirrito in 1948. Jane saw in Metsie a diamond in the rough. She encouraged him to apply to college even though he never graduated from high school. The University of Iowa agreed to take a chance on Metsie. Four years and two sons later, Metsie received his BS degree from Iowa’s School of Engineering. In 1953 Metsie began his 30-yr career at Eastman Kodak Co. in Rochester, NY, where he and Jane raised their family which included two additional sons.
Metsie became active in many professional and community affairs. He was a long-time member of St. Thomas Catholic Church, president of the Kodak Industrial Engineering Society, the Irondequoit Lions Club, and the Iroquois School PTA. Metsie enjoyed campaigning for JFK, Louise Slaughter and many local Democrats. His hobbies were golfing, bridge, and dancing. Upon his retirement, Metsie reinvented himself, playing an active role as “Baba” to his grandchildren. He traveled overseas to Poland, Italy, and cold war Russia (where thankfully there was no international incident caused by that visit).
Metsie was preceded in death by his parents John and Bratislava Olesiuk, and his brothers John, Joseph, and Steve. He is survived by his wife of 70 years, Jane Cirrito Olesiuk and his sister, Olga Weinack of S. Hadley, MA. He is also survived by his four sons: John (Sue) of Asheville, NC, Daniel of S. Hadley, MA, J. Stephen of Rochester, and William (Karen Seig) of Buffalo. He is also survived by his grandchildren, Joshua and Williiam Olesiuk, Sarah O. Parker and Kelly Olesiuk and Marie, Michael and Christopher Puckett. He is blessed to have two great-grandsons, Charles and Elijah, and other loving family members and friends.
The family wishes to thank the rehab staff at Wesley Gardens for helping Metsie to recover sufficiently from a stroke in 2013 so that he could return home, and for the many home health aides and nurses who provided care for him during the years that followed.

His family will receive guests from 11:00 AM-Noon on Saturday November 3, at Dreier-Giltner Funeral home, 1717 Portland Ave, Irondequoit, to be followed immediately by a prayer service at Noon at the funeral home chapel. Interment will follow prayer service at Holy Sepulchre Cemetery. In lieu of flowers please consider contributing to any hospice chapter.


To send flowers to the family of Metsie A. Olesiuk, please visit our Heartfelt Sympathies Store.

We encourage you to share any memorable photos or stories about Metsie. All tributes placed on and purchased through this memorial website will remain on in perpetuity for future generations.

BV
Steve, we were so sorry to hear of your father's passing; it is so difficult to lose a parent. We are sending peace and love to you and your family.
sue and bill valentine
bill and sue valentine - Monday November 12, 2018 via Condolence Message
Share This:

CB
Billy, Bill & Steve,
I was so sorry to hear of your Grandfather and Fathers passing. How lucky you all were to have him for so long.
Sincere Condolences.
Cheryl
Cheryl Brady - Wednesday November 07, 2018 via Condolence Message
Share This:

MB
I was so sorry to read this. I have loved Metsie and Jane my whole life. My sincere condolences to the whole family.
Marilyn (Bebb) Baber - Sunday November 04, 2018 via Condolence Message
Share This:

JJ
Steve, so sorry for you loss. My condolence to you and your family.
Janice Joller - Friday November 02, 2018 via Condolence Message
Share This:

TK
Steve, so sorry to hear about your dad. Condolences to you and your family.
Tina Karol - Friday November 02, 2018 via Condolence Message
Share This:
1
Page 1 of 1
Share
×

Share on Facebook
Send flowers to the family
Choose from beautiful standing, table and basket arrangements. Safe and secure online ordering.
View Flower Arrangements
What has already been purchased for the family?
Family Log-In